Jordan Perata gave up her high-flying career as an interior designer to launch her own zero-waste shop in the middle of a pandemic. Thanks to her anti-plastic waste beliefs and drive to live a green lifestyle her London outlet Kilo has proved a big hit with shoppers and now generates sales of over £13,000 a month.

Dale McLaughlan was thrust into the news after he crossed the Irish Sea on a jet ski to be reunited with his girlfriend on the Isle of Man. His crazy ‘crime of passion’ landed him behind bars for breaking COVID regulations but caught the imagination of the world’s media who besieged the couple for interviews. DJM  set up an exclusive front page interview in The Sunday Mirror and a tv appearance on Good Morning Britain allowing Dale to tell his story in his own words.

My son, the forgotten victim of Raoul Moat's gun rampage

Exactly ten years after Chris Brown was shot dead by crazed gunman Raoul Moat his family decided to give an exclusive interview on how he had become the ‘forgotten victim’ of the week long siege. His mother Sally and sister Beckie trusted DJM to represent them and we placed their two page interview in The Daily Mirror.

My race hate hell after joking about the rain in Wales

Civil Servant Anne Giwa-Amu took the Department for Work and Pensions to an industrial tribunal for race and age discrimination which left her on the verge of a nervous breakdown. After winning her high-profile legal dispute Anne was awarded £250,000 in compensation. Anne chose DJM to tell her shocking story to help encourage other victims to come forward. We placed her interview in The Sunday Mirror.

Lois Parks and her Reverend husband Paul Parks became the centre of press attention after he was sacked from the church over his abusive behaviour in their marriage. The couple decided to go public to tell how his actions were a result of PTSD and mental health issues from his former career as an SAS soldier. DJM gave the couple a platform to tell their story for the first time in the Daily Mail.

How I came back from the Strictly curse

Abby Cohen’s life fell apart when her childhood sweetheart and ex-England rugby international Ben Cohen left her for his Strictly Come Dancing partner Kristina Rihanoff. After finding happiness with a new partner Abby decided to 'tell her story' and asked  DJM to represent her. We placed a positive two-page spread in the Femail section of The Daily Mail.

Speech therapist Jill Saxby separated from her husband ex-snooker player and tv celebrity Willie Thorne over his gambling which cost the former Miss Great Britain her family home. Jill chose DJM to represent her to give an honest account of how his addiction destroyed their once strong marriage. We placed Jill’s interview in a two-page spread in The Sunday Mirror with follow-ups also appearing in other titles and websites.

Lorry driver Tony Hannington turned to DJM for media support after being approached by reporters when his wife Tracy was jailed for two years following a sustained campaign of domestic abuse against him. Believing he had to speak out to encourage other male victims to come forward and seek help, DJM arranged an exclusive interview in The Daily Mirror where Tony could tell his shocking story. 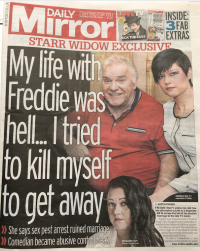 My life with Freddie was hell... I tried to kill myself to get away

Sophie Lea, the estranged wife of comedian Freddie Starr asked DJM to represent her following his sudden death in Spain. Approached by reporters after a series of misleading press reports, Sophie decided to put the record straight and give her side of the story. We arranged an exclusive interview in The Daily Mirror which the newspaper ran as their splash story with a further two pages inside.

SAS star: I turned to drink and drugs as brother died

SAS: Who Dares Wins finalist Louise Gabbitas was represented by DJM during the 2019 Channel 4 series. In a full and frank interview in both The Sunday Mirror and The Sunday People newspapers, Louise  revealed how her life had spiralled out of control after she lost her teenage brother from cerebral palsy and how she used the experience to inspire her brilliant run on the popular show. The fitness fanatic also appeared on the GMB sofa, BBC Breakfast News as well as national radio slots.

Sewer rat who tried to take my inheritance: The excoriating words of a man who nearly lost his beloved aunt's home to a TV 'heir hunter'

DJM represented retired film editor Martin Amstell after he won a protracted legal battle against tv ‘heir hunter’ Andrew Fraser who had  tried to take control of his aunt’s home that was left to him in her will. Fraser obtained legal control of the estate and was just days from selling the house when he was stopped by an 11th-hour injunction. Fraser was ordered to hand back the keys and pay a six-figure legal bill. We arranged a two page interview in the Daily Mail for Martin to tell his cautionary story.

‘She’s NO gold-digger': Father, 75, who lost everything after falling for his grandchildren's 33-year-old au pair insists they are in LOVE... in wake of multi-million pound court battle with his (disgusted) lawyer daughter

Broker Paul David asked DJM to represent him following a High Court battle with his daughter over the family’s multi-million pound property portfolio. During proceedings it was revealed that Paul had married his daughter’s au pair resulting in considerable media interest around the case. We arranged for the couple to defend their relationship and to respond to claims that made national headlines. 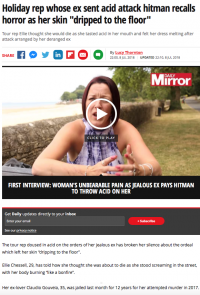 Holiday rep Ellie Chessell chose DJM to represent her after her ex-boyfriend and an accomplice were jailed for a total of 21 years in Portugal for an horrific acid attack . Bravely deciding to speak out despite her injuries, DJM arranged interviews with The Daily Mirror and This Morning plus a magazine enabling Ellie to tell her story of her courageous fight to bring her attackers to justice and slowly rebuild her life.

My evil ex tortured and killed her au pair because of me: Former Boyzone star at the heart of the twisted murder case gives a chilling insight into the psychotic beauty who tried to destroy his life too

The Mail on Sunday

Boyzone founder Mark Walton approached DJM to represent him after his ex-girlfriend Sabrina Kouider and her partner were found guilty of torturing and murdering French nanny Sophie Lionett. After Kouider tried to implicate Mark during the two month trial which made international headlines, Mark wanted to give his side of the story. DJM secured national newspaper and tv coverage allowing Mark to put his story across in his own words.

How a lesbian fling destroyed my life: Teacher, 26, was 'driven to the brink of suicide' by her secret lover who bombarded her with 300 messages, attacked her on her parents' doorstep -and then accused HER of assault

The Mail On Sunday

PE teacher Alexa Collier asked DJM to represent her after she was cleared of assaulting a former lover. The widespread publicity surrounding the case left her life in ruins and cost Alexa the job she loved. Alexa wanted to put the record straight in her own words and we arranged a two-page spread in The Mail On Sunday.

DNA Detective Julia Bell asked DJM to promote her work reuniting long lost families. We arranged big page leads in both The Sun and The Times telling the story of Robert Weston who tracked down his family decades after being abandoned in a cinema toilet. DJM also secured prestigious interviews with Emma Barnett on BBC 5 Live and the Victoria Derbyshire show on BBC 2. The story was also picked up by international outlets  giving Julia and her work unparalleled media exposure.

When Kath Rathband, widow of PC David Rathband announced the happy news that she was to marry again she knew her big day would attract media attention. Having worked with DJM previously Kath asked if we could handle the story in her own words. We arranged a  two-page interview in The Sunday Mirror and a page in The Sunday People which covered her wedding exactly how she wanted it reported.

Michael and Louise Green who run Laughlines, a comedy entertainment business approached DJM to handle their PR after becoming involved in a legal dispute with celebrity John Cleese and his management which was threatening their well established company. The Fawlty Towers star had claimed their Basil and Co parody show had breached his copyright which the couple strenuously deny. DJM secured extensive sympathetic media coverage on their David V Goliath battle which included a page lead in The Sun on Sunday and an exclusive interview for MailOnline.

After Sarah Jay’s husband Pere Daobry a former Met Police firearms officer was given a 12 week suspended sentence for trying to throttle her during a violent outburst, the mother of one was approached by media outlets wanting Sarah to tell her story. She contacted DJM on recommendation. Sarah  wanted her interview to give other female victims the encouragement to come forward and report their abusive partners. Her moving interview was published as a centre-spread in The Sun on Sunday complete with a Helpline number.

Sarah and David Finan’s world was turned upside down after a former friend accused them of molesting her during a party. The couple were stunned when they were charged with sexual assault only later to be unanimously cleared at Maidstone Crown Court. Surrounded by reporters they approached DJM to handle their story. We secured a two-page interview in The Sun on Sunday allowing them to set the record straight and move on with their lives.